I walked around the Buckhead bar at one of the many trade group networking meetings I attend, this one with SMPS. I walked up to a group of one man and several women I didn’t know, but they were laughing, a good sign. As I shook hands with the man, I could feel my hand being nearly crushed.

“Where did you learn to shake hands like that?” I asked him.

“From squeezing cow teats in Mississippi,” he said to the delight of the women who knew him.

“I’m sure you’ve never been there or heard of it,” he said. “A small town named Okolona.”

I knew this was going to be good. “I’ve been to Okolona,” I said. “Just south of Tupelo, where Elvis was born.”

“What were you there for?”

“We went first to hang out in the yard of one of the local residents who was organizing the march,” I said. “I remember they had a big barbecue before they went off to start the march and to face the Klan. It was kind of tense.” 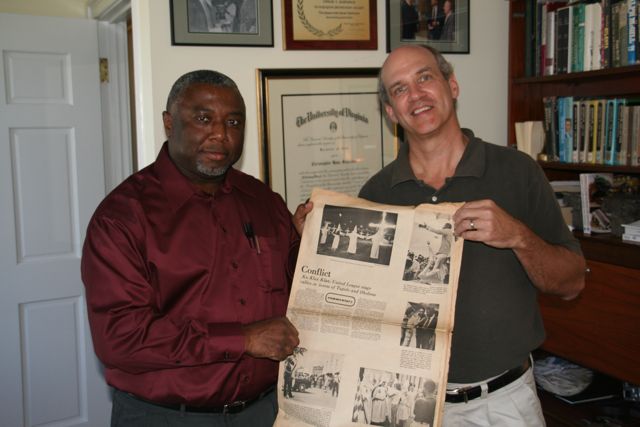 His name is Melvin Buchanan and that same weekend when I was a wide-eyed 21-year-old reporter for the Delta Democrat-Times in Greenville, Mississippi, Melvin was a wide-eyed 17-year-old just getting started in the civil rights movement. We agreed to have lunch soon.

The morning Melvin was to come to my office, I went to the garage and opened up an old trunk full of junk I have saved – much to the chagrin of my family. It’s not just the trunk. I have many of the newspapers for which I wrote front page stories in boxes piled up to the rafters. One time I was having lunch with Ga. Court of Appeals Judge Jack Ruffin, about whom I had written one of my more interesting profiles as a reporter for the Augusta Chronicle when he was a controversial civil rights attorney there. I had made the same trek to the garage that morning and found a copy of the full-page spread. The judge was very pleased to see it 25 years later.

I was telling my staff at our “huddle” that morning about Melvin coming to join me for lunch that day. I told them how I had met him and how he was there for the Ku Klux Klan march and how he was coming in to our office in a few minutes and that I would introduce him. I noticed Devin, our employee who happens to be African-American, getting nervous. Her eyebrows went up and she looked across the table at her office-mate, Amber. I realized I had left out one important detail: Melvin was black and he was marching against the Klan. Everyone broke out in nervous laughter.

I surprised Melvin when he walked in, pulling out the August 1978 copy of the DDT, with my Klan photograph on the front page and a full-page photo essay just inside. He looked over the photos of all the people in the crowd, naming one after another. I was hoping he would find himself published there, but he wasn’t. I’ll have to return to the garage … I have my roll of negatives from that weekend … somewhere.

Over lunch at Tamarind Seed, Melvin and I talked about the pending election of Barack Obama as president and what a remarkable change that represented since we first crossed paths 30 years earlier. Melvin’s engineering firm recently downsized amidst the economic turmoil and he was left without a job. But he dazzled me with his recall for names of nearly everyone he’s met and his knowledge of the construction and architecture and commercial real estate industry. He talked about the many people with whom he stays in touch and the many he mentors. To the young people who ask him advice about careers, he tells them, “No matter what industry you are in or what job you have, remember one thing: You are always in the people business.”

Melvin will find a new job soon. People have always told him he should be in the PR business, since he knows and remembers so many names and faces. I told him I’d be happy to help get him started if he ever did want to hang out his own shingle. He would be fabulous at it.

Had I not walked up to Melvin that evening in Buckhead and shook his hand, we’d never have made the connection. Had I not dropped by my new newspaper office that Friday afternoon in August 1978, three days before I was to report to duty on the following Monday, I would never have been invited to go on the weekend trip to Okolona. It all re-confirms my notion that if you talk to anyone long enough, you’ll find a connection you never dreamed you have.

Turns out that first weekend in Mississippi was a highlight of my time down there. I was so pumped as we drove back through the Delta that hot Sunday morning, back toward the Mississippi River town of Greenville, to what I was then to call home for more than a year. If that was my first weekend, I thought, think what the rest of the time would be like. Well, it was never quite as exciting. I covered police and courts and chased fire engines and car wrecks and followed murder trials and attended Rotary clubs and school board meetings, but they all paled in comparison to that first Saturday on the job.

That day in Okolona was fascinating. Lines of local African-American residents marching down one side of the main street of town, paralleled by a line of Ku Klux Klansmen marching the opposite direction on the other side of the street. TV crews in the midst, Geraldo’s helicopter hovering above, carloads and truckloads of locals shouting to either side.

The DDT photographer, Larry Looper, and I stood by the pay phone near the end of Okolona’s Main Street, while reporter David Saltz called in his story to the Associated Press. Larry and I looked over our rolls of film (back then we had to wait to develop them in the darkroom back at the newsroom). As the afternoon grew into evening and as David finished his dictation, we watched as the entire downtown – which an hour before had been bedlam and high drama – was emptied out of the last car and truck. A lone, white, skinny teenager, perhaps 14 years old, leaned up against the telephone poll across the street and watched the last car pull away. He looked us over and slowly walked toward us. We stood in the still blazing Mississippi sun as he stopped right in front of us.

All that tension from the afternoon drained out of the three of us. We laughed for a long time.

As the teenager wandered away, Larry said: “Watching all this shouting and goings-on, I wasn’t too sure about this place. For some reason, I feel a whole lot better about this town.”